Description: This YouTube channel is several years old (created in 2008) and has had 8 gun showcase videos published to it. The channel as a whole as had 711,038 views on it’s videos with a total watch time of 1.8 million minutes. The videos were published and promoted to Thai viewers thus nearly all of those views came from Thailand.

Over the last 48 hours the videos received 1700 views and 17K views over the last 30 days. The views have been increasing consistently day by day and are likely to continue receiving views for at least the next several months (as that’s how YouTube’s algorithm works).

Best offer gets the channel, cheers everyone 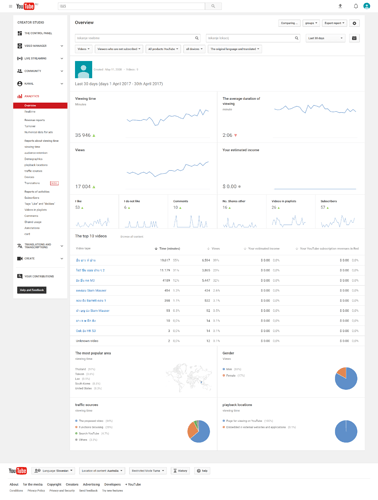 Thank you for listing your property on SWAPD.
Remember, if you happen to find a willing buyer/seller, please use our checkout system for the transaction. Part of what makes our community safe and unique is the oversight of each transaction, and we back this with our money back guarantee. Our staff members are here to ensure everything goes according to plan. We will not be responsible for any losses incurred by circumventing our checkout system.

For more information please visit: https://checkout.swapd.co/
If you’re a new member, please go over our Terms of Service.

Thank you and good luck with sales!

Can you please send me a link to your channel and how much you are asking, thank you.