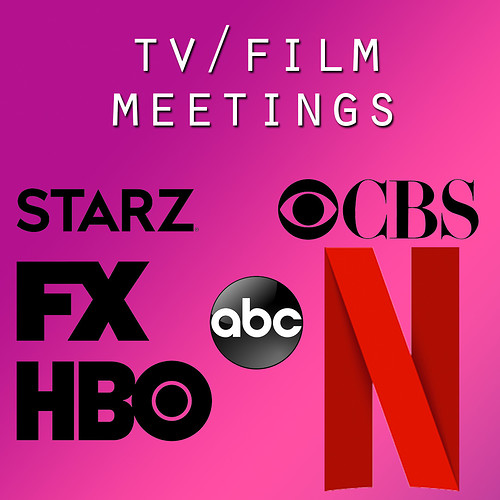 This Listing is for Screenwriters who want a once in a lifetime meeting with a Film/TV executive from a network. Meetings, can take place either In-Person, Via Zoom, Phone Call.

I’m only able to secure meetings for the following networks: Starz, FX, HBO, Netflix, ABC, and CBS. More will be added shortly, and prices will raise after I successfully deliver the first few.

I’ll be giving away (1) Freebie to a notable Swapd user to prove my legitimacy.

As of right now these are the ONLY Networks. Please note I will not be able to facilitate a meeting for Talk Shows/Game Shows.

Please don’t inquire about this meeting if you only have an idea. This listing is for fully developed pitches by accredited screenwriters.

The ONLY exception to pitching just an idea is there has to be significant value. Either, you’re really famous or you have noteworthy writer/producer credits.

Just keep in mind, a great idea for a scripted series or movie isn’t enough. And, quite frankly, if you only pitch an idea, the networks could just hire an experienced writer to draft your idea into a script and treatment.

If the idea is for an unscripted series or movie, then there still needs to be tangible evidence that the idea has value. Something greater than an idea from an unknown, unproven writer.

I am promising the following:

• You’ll be speaking with a highly reputable TV/Film representative from the requested network(s) (Via: In-Person, Phone Call, Video Chat or Email)

• You’ll have a greater chance to possibly getting your film/TV show developed.

I am NOT promising the following:

• You’ll have a continued relationship with this TV/Film representative and network. (This depends on how well your meeting goes)

• Guaranteed development of your pitch. (This also depends on how well your meeting goes)

Moved to Unique Services and marked Spotlight. This is interesting.

jesus christ this is amazing lol. the stuff you on this site man.

Damn this is an incredible opportunity.

Freebie still available to a VIP Member with transaction history

What a unique opportunity, not in the right place right now, but in the future I’d be down to do this.