Think you had a bad day? Talk to Mark Zuckerberg. 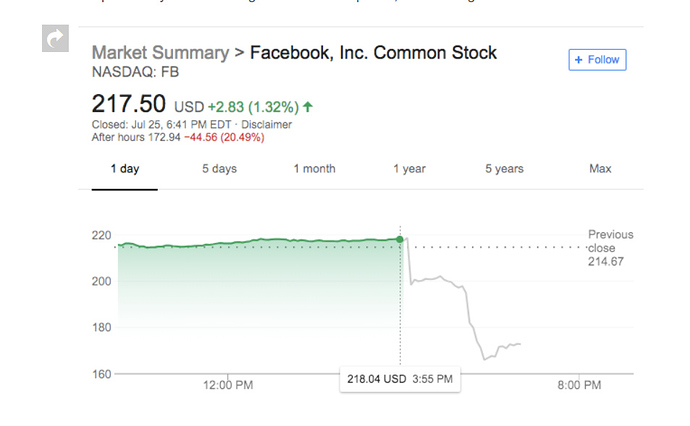 Facebook reported its second-quarter earnings Wednesday and the results, which were worse than expected, sent the company’s stock into free fall, wiping out more than $100 billion off Facebook’s market value.
Facebook’s stock continued to nosedive during the call with investors, who pressed the company on its slowing growth and future ad revenue. Investors were spooked by more than just the company’s lackluster performance this quarter, though.

Facebook’s daily active users didn’t grow at all in the United States, its most lucrative ad market, and the social network actually lost 3 million DAUs in Europe as a result of new privacy regulations. Even in other regions where Facebook is still growing, it’s growing at a far slower rate than previous quarters.

Facebook growth/revenue forecasts were a tad off, and executives are predicting this trend to continue. 20% is a huge dip, I wonder how (if) it will recover.

Facebook is slowly fading, its prime has gone, instagram still is keeping strong but we have to see which platform will take over now…

It recovered immediately…
They had a 30% rise in their profits.
Its bs

what?? THe market is closed? wont open for a few more hours it closed there over night, so it hasn’t recovered at all. This all happened in trading today the 25th for US

and they downgraded to like 18% which leaves 2020 growth being backscaled to 13% growth so the stock is well overpriced now. Gene Munster, Loup Ventures, on why Facebook is getting hammered after earnings. With CNBC's Melissa Lee and the Fast Money traders, Pete Najarian, Tim Seymour, Dan Nathan and Guy Adami.

They had a 30% rise in their profits.

Where are you getting this? Forecasters say they missed their mark. Albeit, just by a little bit, but still. Also, how did they recover? Market is closed at the moment and they are still down 20%, looking at the ticker right now. How is this BS?