How much are Facebook Fanpages really worth? Fanpage sellers, it's time to face reality and lower your expectations

This blog post is dedicated not only to our Fanpage sellers but every Fanpage seller out there. Whether it’s EpicNPC, PlayerUP, etc. You need to face the sad reality and lower your prices. Not because I’ve said so, but because of cold-hard data.

It’s no secret that 2018 has been the roughest for Fanpage owners. With the branded policy changes, to mass deletions, to publishing verifications, running pages these days is hazardous, especially if you want to monetize them the old fashioned way (sharing links). That business model is dead on Facebook, if anyone tells you otherwise, they’re lying or they haven’t been stung yet. There are still ways to earn decent money via Fanpages, but it requires Show enabled pages (or AdBreaks). But, you need captivating content to earn regularly, and good content is hard to make. You cannot copy the work of others and expect to earn, and Facebook is getting pretty good at detecting/reacting to copyright violations. Long story short, it’s no longer easy to earn from Fanpages the traditional way.

Only 18% of sales this month were Fanpage related (on SWAPD)

At the end of each month, we tally up all our transactions, and we see what sells and what doesn’t. In October, out of every ten transactions, only two were related to Fanpages. Compare that to last month (September 2018), where 26% of sales were related to Fanpages. And the month before that was a tad higher, and so on and so on. If I were to create a graph of Fanpages sold in the past year, it would look like this: 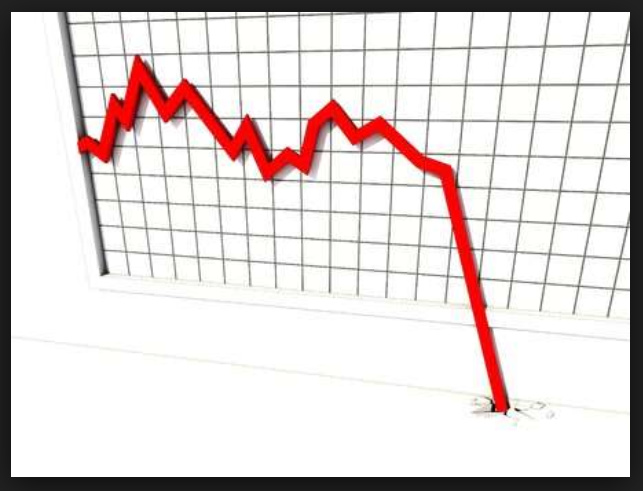 In fact, things got so bad, that our sister site ViralAccounts.com went from doing one million USD in sales volume in 2017 to a mere 67,000 USD in 2018. Keep in mind that Viral Accounts mostly dealt in Fanpages. That should give you an idea where the market stands as far as Facebook Fanpages go.

I can’t help to laugh inside when I see people asking 2000-3000 USD per 100K Fanpage, especially for something generic like a humor related page, no matter how active it is. My professional side always tells me to act cool, but on the inside, I am boiling when I hear sellers say “it’s worth it bro, it has 100k fans!” The days of premium Fanpage prices are over, the sooner sellers are aware of this, the better for everyone else. Now, there are rare cases where Fanpages can still yield high price tags, but only for very desirable and rare niches with uber activity.

“But I’ve paid so MUCH for my Fanpage, I can’t sell it for less!”

It’s called cutting your losses. Just because you’ve paid an X amount for your Fanpage, it doesn’t mean it’s worth that much. Sometimes there are situations outside of our control, like in this case, the drop in the value of Fanpages. I also see many Fanpage squatters, who keep saying “I will just sit on my pages until things get better.” Well, I can’t predict the future, and I don’t know whether things will improve. But I can safely assume that the odds of things getting better are very slim, and to the contrary, the pages you’re clinging on may lose on value even further.

“Whatever, I can do what I want and list at what price I want.”

Right, I can’t argue there. But, take a look at the recent listings from the past few weeks on SWAPD. There are a lot of solid looking Fanpages popping up. But, is anyone buying? If they are, it’s not through our checkout, as sales have hit an all-time low. Keeping prices high wastes everyone’s time, in my personal opinion.

This isn’t a vent post, even though it sounds like it. I plan to educate/spread the word, as no one is really talking about this, and sellers are stuck in 2016 as far as prices go. This needs to end. 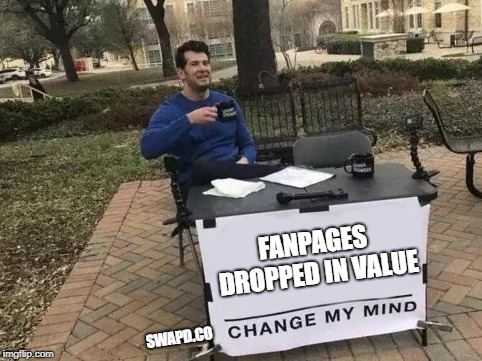 By the way, I didn’t account for AdEnabled and Watch pages in my stats. I have only counted stat (50k followers and up) pages. Watch enabled pages sell very well but they have zero likes so I am not treating them like regular Fanpage sales.

No and your request is off topic. Smaller channels are easy to fake, so we can’t allow it, sorry.

I am totally agree with you.

I completely agree! I know I have a page right now with 200k followers that I paid $1500 for a year ago, today I could probably get $900. It’s not that it’s a bad page,it’s that buying fanpages today is far riskier than it was 12-18 months ago.

I totally agree, without ad break or watch channel, fan page is a worthless invenstition.

Now, when my page gets approved for adbreaks…my page jumps in value. But, I can’t value my page based on “maybes”.

I totally agree, without ad break or watch channel, fan page is a worthless invenstition

Definitely not, when u can promote in film brandings, if u got that contacts for promoting movies & corporate ads via ur page, then facebook is best… iam making my living out of this.

Have a look mate @markbmedia

Well said! Being a page owner myself, it frustrating when other page owners try to convince us that their high prices are justified. Thanks for putting this together.