Page Publishing Authorizations - If you own large Fanpages with a US fanbase, you might be screwed! 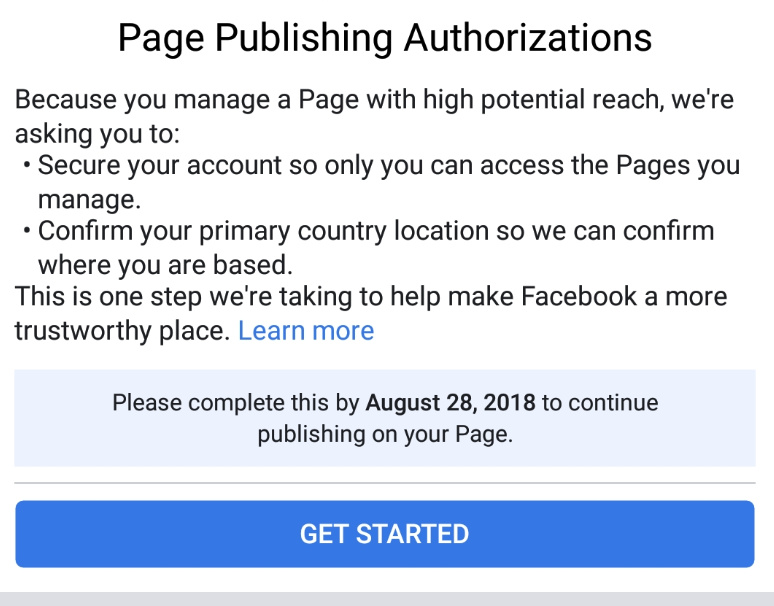 Have you received this pop up recently? If not, and you happen to own influential US-Based Fanpages, your account may be hit with a Page Publishing Authorization process.

Even though one of our users made us aware of this new Facebook nuisance, Techcrunch was one of the first websites to report on this new roadblock.

Facebook today announced it’s implementing a new measure to secure Facebook Pages with large U.S. followings in order to make it harder for people to administer a Page using a “fake or compromised account.” Beginning with those that have large U.S. followings, some Facebook Pages will now have to go through a “Page Publishing Authorization” process. This will require the Page managers to secure their accounts and verity their location.

Facebook says the process only takes a few minutes to complete. If a Page requires this authorization, the Page admins will receive a notice at the top of their News Feed directing them to begin the process.

If they choose not to submit to Authorization, they will no longer be able to post to their Pages, the company says. Enforcement will begin this month.

So, how does the Page Publishing Authorization look like?

First, Facebook is asking US-based Page managers to secure their accounts using two-factor authentication. This makes it more difficult for their account to be hijacked by a third-party. Undoubtedly, it also makes it annoying if you run a lot of properties under a number of accounts.

Second, the Facebook Page managers will need to verify their location. This will then be set as the Page’s primary country and display in the new Page Info tab Facebook introduced in June. Basically, if you’re Russian and own US-based pages, it will be shown on the page, whether you want it or not.

“Our goal is to prevent organizations and individuals from creating accounts that mislead people about who they are or what they’re doing,” reads a Facebook announcement about the new process. “These updates are part of our continued efforts to increase authenticity and transparency of Pages on our platform.”

The changes follow the recent news that Facebook had found evidence of possible Russia-linked influence campaigns on its network, whose goal was to influence the U.S. midterms. To recap, Facebook believes it was being used to sway US elections (which according to recent scandals, it really was).

If we weren’t in this business for a while, I wouldn’t believe that Facebook is honestly trying to protect Americans from political meddling and would look elsewhere for answers. However, I’ve looked back at the recent years of running this business, and it all makes sense now (things to happened to our company pre-US elections). To save time from writing it again, let me just copy and paste the story I’ve told one of our users:

This looks like another inconvenience/problem for everyone. But, I tell you what. Looking back now (pre-Trump winning), I was getting shady buyers buying up ANYTHING US-Politics related for unbelievably high rates (I am talking 10K USD for 50-100K pages). Once, I had a problem where a US politics purchased from ViralAccounts got stolen. I got a call from this (the buyer) company to fix this, and they have said that they will even pay the same price again if I do. I wanted them to identify themselves (what company/EIN/etc.), and we got into this dragged out fight about how they don’t/can’t/and won’t reveal themselves to us because they simply “can’t.” I naturally thought there were the scammers themselves since all the anonymity, so I’ve kind of omitted them at first. They’ve told me that they could only tell me they work for an organization, but they can’t tell me who. I thought it was a joke at first, but no. These calls/talks lasted for weeks, they were very persistent.

Long story short, I’ve ended up locating the page and the original owner (he claimed it back as it was stolen from him), and the shady company did purchase it again, without any problems. So, these measures by Facebook are perhaps warranted, but then again, they’re probably only mad because their own platform is being used to push agenda other than theirs, as I am 100% sure they steer the narrative to their liking/favor.

By now, Fanpage owners should be used to being dragged through the mud, but these Page Publishing Authorizations don’t sound bad. However, this still leaves an uncomfortable feeling of being watched more closely, which undoubtedly puts more of your assets at risk.

Link post disappearing from Fanpages a few seconds after being posted. What gives?
How much are Facebook Fanpages really worth? Fanpage sellers, it's time to face reality and lower your expectations
FB bug when accepting Invite to admin page
Swapd August 11, 2018, 12:21pm #2

By the way, this isn’t something new. I believe Facebook had a similar process for political pages. But, it seems they’re going all out and protecting every US citizen now

Can’t blame them when people like Turmp get elected

so stay away from political pages or similar ones

No, you don’t understand. EVERY page that has a large US fanbase is now under this new policy.

I got that pop up this morning

Are the pop ups available only for the page owners? What about the admins?
Also, would 200k US fans on a 1.1 M page be considered as a huge fanbase?

The thing is the admin who took the page under his business account as page owner is AWOL. The only way to contact him is through FB and he rarely opens any message or even open his account I guess. Plus, I still haven’t seen any way to change page owners with just a admin… So I am a bit scared if the page gets penalized over this…

Just an FYI to people who have been hit with this (many still didn’t do this), please use this link to get authorized for publishing to US fans: https://www.facebook.com/business/m/one-sheeters/page-publishing-authorization